Channel missing out on deals it doesn’t know are there: Forrester analyst 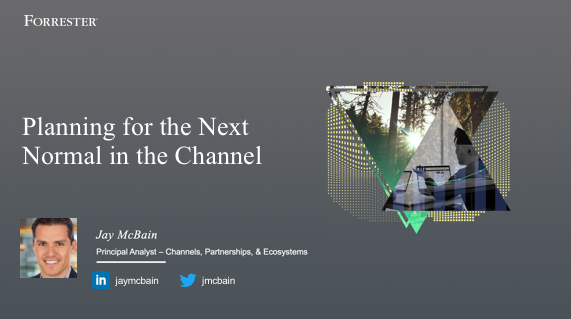 Forrester’s Jay McBain spent 30 minutes with 500 channel chiefs last year just before the pandemic hit and kicked the software era into overdrive. It became clear in those conversations that ecosystem management was becoming a critical component of the channel software stack. Having partners by your side that can connect the dots to create a technology partner ecosystem is essential, says McBain, Forrester’s principal analyst of channels, partnerships and ecosystems.

Planning partnerships has been further complicated by companies that fall in the startup or emerging tech market – firms specializing in the IoT, AI, or quantum computing – which are exploding in numbers. More than 800,000 of them exist globally, according to Forrester, many of them greatly influencing the tech supply chain.

“These are huge new influencing channels, along with cloud brokers and aggregators and cloud consultancies,” McBain told members of the Canadian Channel Chiefs Council during a recent presentation. “It’s a different world,” he said, and if partners aren’t careful, they’ll miss out on deals “they don’t even know are there.”

SaaS vendors like PartnerStack, for example, can be found on Forrester’s Channel Software Tech Stack 2020 list, located in the rapidly growing ecosystem management category. Other SaaS companies can create a fully customized channel program through PartnerStack, which is then managed automatically so they can focus on growing their community and increasing sales.

“Partner and channel are the last fossil inside of SaaS companies. They’ve never had to go through it and seek third-party distribution, people have always come to them. But as you go to market, the cost to acquire customers has been increasing. It’s actually more efficient to go through a network of distributors to bring in new customers,” PartnerStack CEO and co-founder, Bryn Jones, told Channel Daily News in a previous interview.

In Canada, according to McBain, approximately 81 per cent of accountants are performing tech services. He was quick to add these services go far beyond installing Sage or Netsuite.
“We’re talking security, compliance, business continuity and integration work,” he explained.

For Canadian channel chiefs and partners, the main takeaway is that when one considers the growing list of sub-industries and tech categories and the growing number of lines of businesses relying on technology, it leads to 35 million market opportunities.

The explosion of e-commerce and the power of visibility

Online marketplaces and e-commerce tools have grown more in the last three months than in the last 10 years combined, according to Forrester. Roughly one-third of the U.S economy is driven through marketplaces, McBain noted, on portals belonging to IBM, Amazon, Microsoft, Oracle, and dozens of others. McBain and his team at Forrester last year predicted that 17 per cent B2B purchases would flow through e-commerce marketplaces by 2023. That year has been dialled back to 2021 in the latest projections, putting an enormous strain on traditional distributors like Ingram Micro and Tech Data.
“They’re facing a lot of headwind,” McBain said, overshadowed by the latest surge in e-commerce sales and left to pick up “table scraps.”

They’re playing very little in cloud and hybrid cloud environments, and even losing battles on items on their core line card. The popularity of subscription services has cut some distributors off from large clients in major markets.

“Your value has to be visible and the customer has to realize the value you’re bringing. For an industry that’s hidden behind the customer for 39 years it will be tough,” McBain said. “My college-aged kids don’t know who broad line distributors are as fortune 500 companies. But they know who Intel is because there’s a stick on their PC.

“The battle of the future will be over influence.”